Enjoying the Sergei Rachmaninov piano pieces at the Kurashiki-kan Concert

Our upcoming Fall Season Concerts will start in October at the Kurashiki-kan.

We would like to introduce you to our last Kurashiki-kan concert of the summer season in this blog to give you some idea of how enjoyable our weekly concerts are.

Our special guests this time were both from Russia, Mr. Andrey Zheltonog, the pianist, and Ms. Anna Oranskaya, the story teller, introducing the Russian composer, Sergei Rachmaninov. 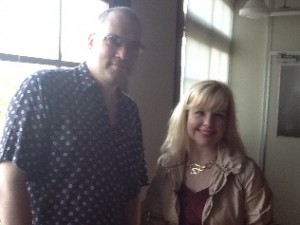 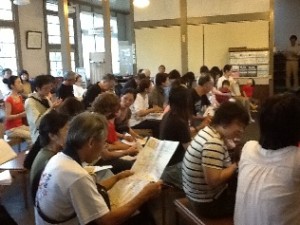 0minutes before the concert. The audience can hardly wait for the performance to begin. 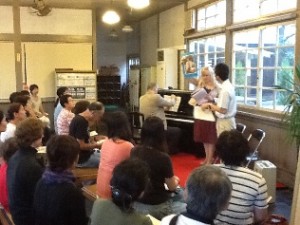 Here Mr. Andrey Zheltonog, Ms.Anna Oranskaya and an Interpreter Mr. Ishikawa explained about the history and background of the composer Sergei Rachmaninov.

They selected some of the composer’s piano pieces to accompany their narration about his life.

He was born to an aristocrat family in the Novgorod prefecture on March 20, 1873. When he was only 9 years old, his musical talent was already recognized with a grant of a scholarship and his acceptance to the Saint Petersburg Conservatory.  However, he spent most of his time ice-skating on the skating rink instead of studying in classrooms.  As a result he ended up failing classes. After having a family emergency meeting, he decided to attend the Moscow Conservatory to continue his study with a disciplinarian, Nikolai Zverev . 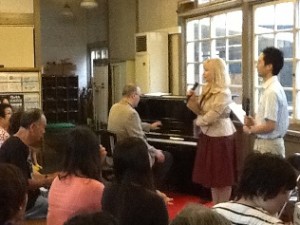 After studying for 4 years under Nikolai Zverev, he was well on his way to becoming a famous composer.

One day, a woman named Fekla Russo met Rachmaninov for the first time in 1891. She became an ardent admirer of his, and she sent a white lilac flower to all of his public performances until his death in the city of Boston in the United States in 1942. Some people say that the white lilac flower symbolized a deep meaning for Rachmaninov throughout his life. 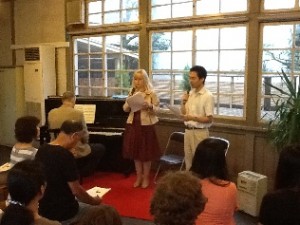 Ms. Anna Oranskaya presenting some photos of Rachmaninov’s to the audience while narrating his story.

The 1917 Russian Revolution meant the end of Russia as the composer had known it. He immigrated to the United States with his family in 1918. Yet, he became homesick and depressed after realizing it was impossible for him to return to his beloved homeland.

Therefore, all his musical compositions represented his patriotism to Russia, and the nostalgia to his homeland. 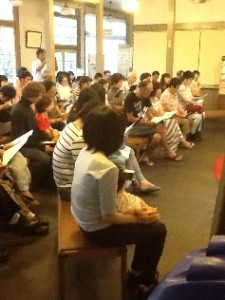 ‘Nostalgia-Kokyo’, well known in Japan, sang a heartwarming song together with the audience as the great finale of the concert.

What an enjoyable and memorable time for us to experience in only 30min! 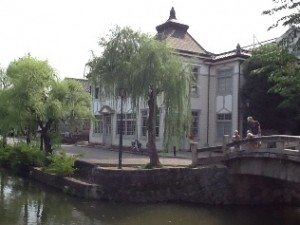 You are invited to come and be our guest and to enjoy our free admission concerts. Next concerts restart in October. The musical performance time is between 18:00 to 18:30 every Friday.  As we look forward to welcoming you at the Kurashiki-kan Tourist Information Centre in October!!